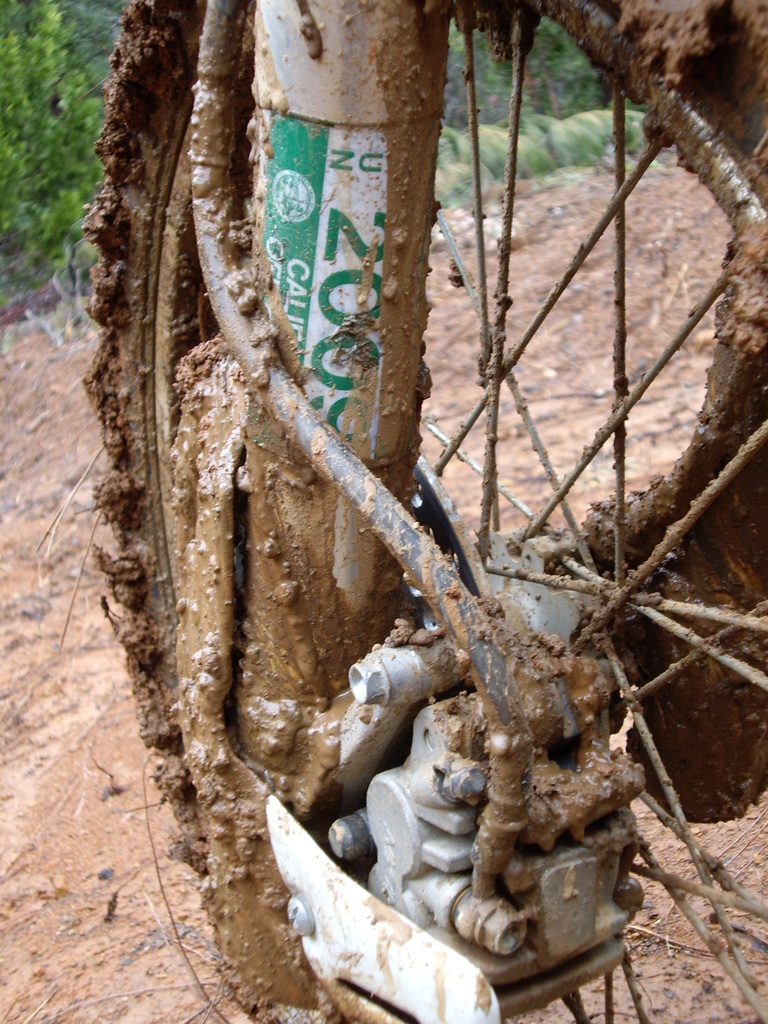 Story by Helli Kornton, with Will Guyan

This year’s ride was indeed a different one, not quite what anyone would have expected. First held in 2008, it has become an annual affair in early May, organized and conducted by Family Off-Road Adventures based in Stockton, CA, an outfit run by Lawrence Borgens.

The start and end of each day’s ride is a place called Buck Meadows, about 10 miles west of the Yosemite Park entrance on Hwy 120. The small town offers a hotel and a small country style resort with several cabins and single wide trailers as well as an RV park with full hook up.

After a riders’ meeting, Saturday’s ride took off under cloudy skies and wet roads but no more rain. There were two route options: the harder loop was all dirt, the easier all pavement. We headed towards Yosemite National Park then a left turn onto Cherry Lake Road lead us down into the Stanislaus River Gorge, across Tuolumne River and through a place called Cherry Creek. At the split, riders not quite sure of their skill level could bail out on routes leading to pavement. Not knowing what to expect after all the rain, I was not sure what the day would bring, but I had a feeling that it could be quite tricky. One concern was a long stretch of freshly graded dirt road along steep, rugged terrain where I expected quite muddy conditions.

The fun started with the first stretch of dirt road of about five miles and lead to Jawbone Fire Prevention Station. Due to the wet conditions, Lawrence Borgens and I were the last riders to take off, intending to sweep the course and assist slower riders or anyone who may need help. A small bridge took us over a creek turned into a raging river over night, and just beyond the gravel road turned soft and muddy. This was a sign of what was expected ahead. Section two started out on gravel as well, then forest, until we came to a split in the road. The way to the left was the easier option, through easy to navigate mud. To the right a harder more technical loop of about five miles, which ended up in the same place.

After pointing two riders in the easy direction I spun my rear wheel leaving a slide-mark at the entry to the left hand turn (a sign we often use to communicate direction). The trail was tight through thick Manzanita, reaching far into the trail, dripping wet from the rain. It was much more muddy and slippery compared to the road I was just on, and I noticed several tracks, two of them made by street rubber! Oh boy, this’ll be interesting.

A few hundred yards up were two riders stuck on a very slippery up-hill with a nasty rut on one side. I passed by, parked up against the bushes and walked back. A 1200GS Adventure with “street rubber” and a KLR, belonging to his friend needed a boost. I helped to get things straightened out and gave a few mud riding tips and luckily things got moving again. Every one of these guys despite the challenging terrain was in great spirits and having fun.

Then a rider came towards us from the forward direction. He was on a 1200GS Adventure full of mud from head to toe. Once stopped, I noticed he seemed out of breath. Heavy steam coming off his ride, gear, and head as well once he took the helmet off. He told us that somehow he ended up alone and had gotten lost, riding through miles of very deep mud before realizing that he was off course. He had tipped over several times having to pick up the bike by himself on very slippery terrain. The guy was tall, strongly built and seemed OK, but it was quite obvious that he over-worked himself. After several minutes of conversation I asked if he was planning on completing the ride to the lunch stop. He gave me a big set of eyes and said “no way. I’m taking the escape route and heading straight back to Buck Meadows!” I have to say the man knew his limits and at that moment I also realized a thing or two. One was the words “hot shower” were clearly written across his face! The other was an indication of just how bad conditions must be up ahead, because for him to skip a nice all you can eat buffet lunch said a lot.

I had seven riders behind me, five of which had little to no experience in conditions like this. Once they all caught up I gave some pointers on how to best approach this muddy mess and rode at the rear from this point on. About 35 bikes had come through before us. All together they had painted a 15 mile long, continuous picture of a labyrinth or what looked like lines shaped like winding snakes crossing one another thousands of times! Some tracks came close to the edge of very steep rugged terrain, then the fear factor saved the rider somehow who then managed to swerve over to the other side towards cliffs, trees, bushes, or whatever else was there. The rocks were there in abundance, buried and hiding in mud as deep as a foot or more.

Then, tracks interrupted by hundreds of foot prints, or better said “holes in the mud,” with an imprint of a bike in the middle telling a story not once, but more then a dozen times. Each time I thought the poor rider undoubtedly struggled alone, trying to lift the heavy mud loaded beast, while slipping and sliding out of control, likely to be forced into the ugly wet mess, alongside his muddy ride. Imagine the boots; “soaking wet” for sure by then, without doubt forced off the peg two times or eight, quickly adding to them three times the weight. Each rider’s gear wet from hard work rather than rain, losing strength by the mile, but going on with a smile!

It was hard, rough riding without doubt for any bike, if the rider wasn’t in shape and skilled. Yet one with experience, always prepared for the worst and a bike set to tackle such a task, would prevail and go on with a smile. They will be quite proud of what they did after the fact for a long time to come.

The fact that the large adventure bikes made it through all that was amazing to everyone. Every GS made it through without burning a clutch whether it was dressed in street shoes or dirt. Only one clutch failed, most likely due to operator abuse. It was a new KTM450. Consider how lucky this guy was. It failed just 20 feet past the deep mud disaster. Had this happened miles earlier, the “only” way for him to get the bike out would have been me towing the guy.

From my perspective this was almost too much fun! The X-Challenge worked so well, I frequently rode ahead and turned around to make riders on larger GS bikes aware of which line was best. I laid out straight tracks for others to follow in, rather then having to fight crossing a labyrinth of tracks while getting caught inside one, forcing the bike to change direction each time. I did this with a smile on my face, throwing a rooster-tail of mud 30 feet up in the air and back. I turned around in donut style, not just for fun, but to take advantage of the momentum making it quicker and easier.

Finally once out of the “mud bath”, the road turned into perfect gravel, again a delight for the X-Challenge, and an even bigger delight for everyone else, but perhaps from a different point of view! By then every rider was very happy to have made it thus far and even happier to see a nice gravel road. As we had no cell reception and needed to retrieve the stuck KTM 450, we decided to have the guy wait by his bike and send everyone else off to a now quite late lunch. Locating a signal for the cell was a challenge, but finally we got through, discovering the chase vehicle was a long way off. It was past 3pm by then so I rode from there with intention not to waste any time. The X-Challenge was flawless, reaching nearly 100 mph on wet dirt at times.

A bridge concluded the last dirt section. I am certain there is still a long black streak on the pavement from my back wheel leading up to the intersection’s stop sign. A quick look insured all is clear and up the hill towards Tuolumne at warp speed. Just 3 turns later I passed by the support truck. Quickly I turned around and had a word with the guys. I found out that Lawrence was able to relay a message over radio to someone at dispatch before he got the cell message I left.

Lunch was great and so was the way back on the tight and narrow paved back roads. In fact this was just right after what everyone had been through and actually a true delight to conclude such an adventurous day. At first I strongly considered to take the dirt route back to Buck Meadows but everyone else had seen enough of that. It was past 5 p.m. and we needed to be back for the optional dinner and raffle/door prizes.

Day two was also quite interesting. It had rained some more over night, started again just as we took off and continued to do so throughout the day. The group was quite a bit smaller, maybe 20 riders, as some had chosen not to ride the second day or preferred the easier paved option and enjoyed the hospitality of Yosemite Valley instead. Pavement wasn’t a bad idea, considering what day two had to offer: mud.

The mud was almost black at times, then gray. It was clay type soil, which explains why it was so slippery to ride on. Although everything we had seen all weekend was very hard work, this for the first time presented an actual challenge to me. The muscles in my arms, shoulders and back felt tense and sore just several hundred feet into it, but then one kind of gets used to it. Both Laurence and I learned some things along the way especially about varied surfaces and how any dirt bike does not handle well in these conditions.

Even though this ride was so unexpectedly tough for most, overall it was one of the best I’ve ever been on. The reason is that everyone who made it out there experienced a true adventure-type environment. They may have hated the mud and slightly cold weather but no one will ever cease to talk about this ride. Their grandkids will hear about this. In my mind exactly what we need to promote BMW bikes. Again, the big bikes proved that they could make it through what no one would have expected. The camaraderie was top shelf because everyone was in the same situation. Every rider rode with caution and a high level of safety, because if not likely someone would have gotten hurt. I rarely ever worried about an injury because the conditions kept the speed low, yet it was always exciting and extremely challenging. Feel like joining us next time around? We’d love to have you.

Making Your Own “Single Track”